Well, for my sci-fi novel (I still haven’t come up with a name), I’ve designed an ocean planet inhabited by a humanoid species, with a vaguely Stone-Age culture (after all, it’s hard to forge bronze underwater.) Here’s some of the information. 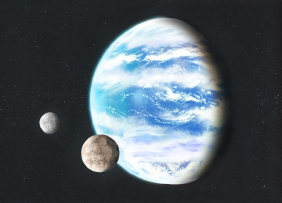 A tropical ocean planet, orbiting two suns, covered entirely in water that is hundreds of kilometers deep, with some large floating algae mats. The atmosphere has a very high concentration of water vapor, making the surface of the ocean not a very sharp contrast- the water just gets thinner. You can swim up to 500 feet above the ocean’s surface.
At the very bottom of the ocean, pressures are so great that the water is compressed into ice, despite actually being above freezing.
Nearly everything has bioluminescence, so most of the ocean is basically in eternal twilight.
‘People’: humanoids, about 7’3″ tall, that can live over 630 years. They have extra long, webbed fingers and toes; a ridge along the spine that is believed to be a vestigial dorsal fin; long, pointed ears, the better to hear underwater; greyish-green skin that is pale on their bellies and necks, and has a reddish tint on the rest of them; and extra-large blue, green, or purple eyes with a nictating membrane, or third eyelid, that protects it. Their sharp-toothed mouths are curved slightly up at the corners. The only hair on their bodies is in their eyebrows and eyelashes; that on their scalp is really external gill filaments that extract oxygen from the water, and are thus kept fairly long. They have phosphorescent patterns on their skin based on tribe. They have a rapid healing mechanism not fully understood.

Things to go, places to do. Wait… take that, reverse it.

Slightly Left of Somewhere Else

A webcomic with teenagers, hijinks, high school, and magic. What could go wrong?

Just a man and his homebrew worlds.

Goblin on The Grid

"You into wizards and shit?" You'll fit right in.

It's not about stat optimization, that's for sure.

A Rainbow at Midnight